Earlier this week, Mississippi held a special Senate election runoff race. This was an atypical race, as party labels associated with each candidate did not appear on the ballot. (See a Vox piece and Twitter thread from Alex Garlick for more context.) As Garlick alluded to, this begged an interesting question: how would the lack of party labels affect voting behavior? Would this aspect disorient usual partisan tendencies?

As one way of speaking to these questions, I turned to county data from last Tuesday and prior elections in Mississippi. In the graph below, I plot Democratic two-party vote share in the 2018 special election runoff against Democratic two-party vote share in the 2016 presidential election, a baseline indicator for the partisan makeup of each county. I also overlay a loess line on the data, show the mean vote shares in each year, and display the adjusted r-squared for a linear regression of 2018 vote share on 2016 vote share (weighted by the number of 2016 votes cast in a county). 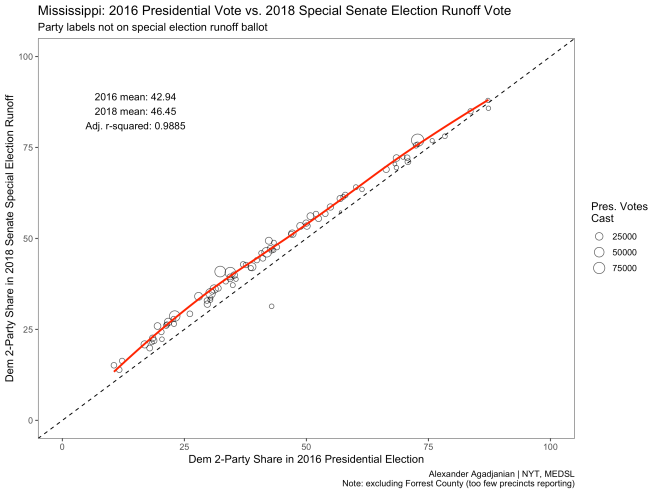 As the graph shows, partisan voting tendencies seem to have held up strongly in the 2018 special runoff–even in the absence of party labels. The rounded r-squared value of 0.99 captures this most succinctly. As further evidence of this strong relationship, when compared to the relationship between 2016 presidential vote and the 2018 regular Senate election vote–the latter of which had party labels on the ballot–the 2018 special election saw voting behavior that was not any less consistent with the underlying partisan natures of each county. The roughly equivalent r-squared values for each relationship indicate this.

Lastly, I did a rough check on the role for race in differences observed in the 2018 special runoff (past research notes the inclusion of party labels seems to increase election participation among blacks). Perhaps the lack of party labels made white counties vote less Republican than usual and black counties less Democrat than usual. When plotting the difference in county level Democratic vote shares from 2016 to 2018 (higher values indicates 2018 overperformance) against county black percentage, however, evidence does not support the above idea. Democrats overperformed in 2018 relative to 2016 just about equally across different racial composition levels of counties.

As I mention throughout this piece, the data and relationships shown here are “rough,” as a picture drawn from county level data–trying to speak to individual level behavior–will always be. With that important caveat in mind, it’s still worth noting the upshot of these results: even without party labels on the ballot, the Mississippi special runoff tracked partisan trends closely. Perhaps this means voters knew which candidates were affiliated with which parties well, especially given that this race was at the top of the ballot.