The book Democracy for Realists is incredibly important for understanding the current American political environment, but as its authors Christopher Achen and Larry Bartels show, it also sheds light on key historical events. In one particularly informative example, Achen and Bartels apply their framework–the predominance of social identities and groups over issues and policy preferences for shaping political outcomes–to the question of what drove white partisan realignment in the South. Conventional wisdom holds that differences in opinion on racial policy issues underpinned Southern white flight from the Democratic Party. Achen and Bartels, however, demonstrate that the evolving partisan distribution of Southern whites did not differ much by opinion on key issues, such as support for or opposition to (1) enforced racial integration in schools or (2) government aid for blacks. Instead, Southern whites on either side of these issues moved just about equally away from the Democratic Party and to the Republican Party, leading Achen and Bartels to conclude that white Southern partisan realignment was not about policy issues. In further analysis, the authors show the partisan movement centered more on white Southern identity, proxied by feeling thermometer ratings of “Southerners,” as those strongest in this identity were most likely to have left the Democratic Party.

While not as specific policy preference questions as the ones Achen and Bartels used, there is some other interesting data in the ANES–not used by the authors–about general issue positions and perceptions speaking to racial conservatism. I wanted to check these, as well as the Southern feeling thermometer the authors used, as a way to further shed light on white Southern partisan realignment–and whether it varied more by issue positions or indicators of identity attachment.

For a couple years in the 1960s and 70s, the ANES asked respondents whether they favored desegregation, strict segregation, or something in between. Below, I plot how Democratic margin (Democratic % – Republican %) looked like by position on this issue among whites in the South. (Note: In all of the below plots, points correspond to sample size to give a sense of certainty of the estimates and serve as a reminder that these should be interpreted with caution as they’re not very precise.)

This is a short time frame, but if issue positions were driving partisan realignment, we would expect people who favored strict segregation/something in between to become less Democratic (i.e. drop further downward along the y-axis) at a faster rate than those who favored desegregation. At least in these early stages of realignment shown here, that’s not the case. There is movement (downward) away from the Democratic Party, but it doesn’t consistently occur in either of these issue position groups to a greater degree. Instead, those favoring the more racially liberal position of desegregation (the red line) trend Republican at faster rates in some of these years.

Another question with a longer times span is also informative. From the 1960s to the 90s, ANES respondents indicated whether they believed civil rights leaders pushed too fast, too slowly, or moved at the right speed. While not about a specific policy, the question does capture racial ideology to some extent–answers of “Too fast,” plotted in red in the below graph, mark the more conservative response. 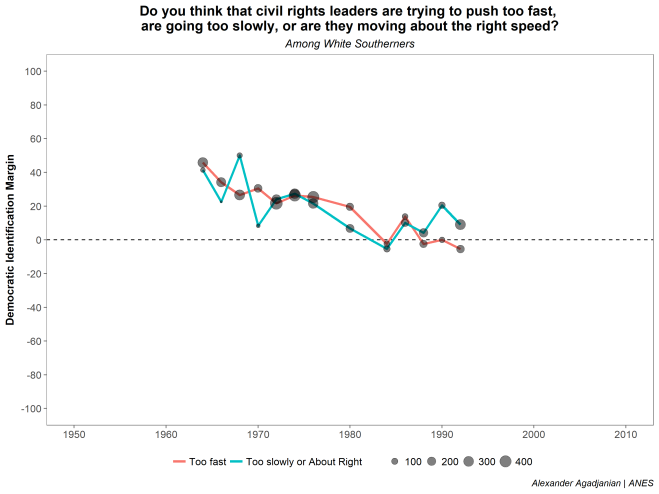 As the graph shows, shifts away from the Democratic Party do not follow conservative or liberal positions on this issue. White Southerners who believed civil rights leaders pushed too fast and those who believed leaders pushed too slowly/at the right speed were about equally likely to leave the Democratic Party over time. Once again, this goes to show that key racial issues of the day did not shape partisanship change in the white South.

In conjunction with similar analysis by Achen and Bartels that show the same dynamic, the main takeaway here is that white Southern movement away from the Democratic Party and to the Republican Party does not appear to be associated with positions on racial issues. To argue in favor of an identity-driven partisan change story, Achen and Bartels focus on a feeling thermometer of “Southerners” (similar ratings are asked of other social groups too). While far from perfect, this measure should capture some semblance of Southern identity–what Achen and Bartels argue contributes most to the realignment. Like with the prior graphs, I wanted to check how white Southern partisan distribution varies by strength of this Southern identity proxy. I constructed a “Strong Southern Identity” measure (at the 75th percentile of the Southerners thermometer rating) and “Weak Southern Identity” measure from this ANES question, and plotted how the margin for Democratic partisan identification varied over time by these two identity strength levels. (Note: Different handling of this data–e.g. using the median or a rating of 50 as the cutoff for high or low identity strength–produce similar results.)

Taking this graph and earlier ones together, these results further reinforce the notion–as established by Achen and Bartels–that identity, more so than racial conservatism or liberalism on issues, played a bigger role in the partisan realignment of white Southerners. The power of social identity relative to that of policy preferences for political behavior seems to dominate today’s political scene–perhaps this dynamic is a bigger part of American political history than commonly accepted as well.