Political observers often expect major political events to have ramifications for public opinion. The recent release and aftermath of the Mueller Report introduced yet another one of these scenarios. Damaging findings against Donald Trump appeared destined to harm the president’s image. To many, this expectation materialized: in at least a few polls since the report’s release, Trump’s approval declined, with a result from a Morning Consult/Politico poll attracting particular attention:

🚨Our first post-redacted #MuellerReport poll 🚨@realDonaldTrump's net approval is 18 points underwater, the worst we've seen in weekly tracking with @Politico (Close to what we saw after Charlottesville and amid shutdown). https://t.co/DrQD92mee1 pic.twitter.com/Ve2aW12HMs

However, polling movement such as this may not always be as it seems. Fluctuations in the partisan composition of a poll’s sample can often create a mirage of public opinion change. This could be due to a few reasons. For one, random variation in partisan composition from one sample to the next could meaningfully shape outcomes like vote choice and presidential approval. Here’s an example of such drastic variation from Abramowitz (2006): 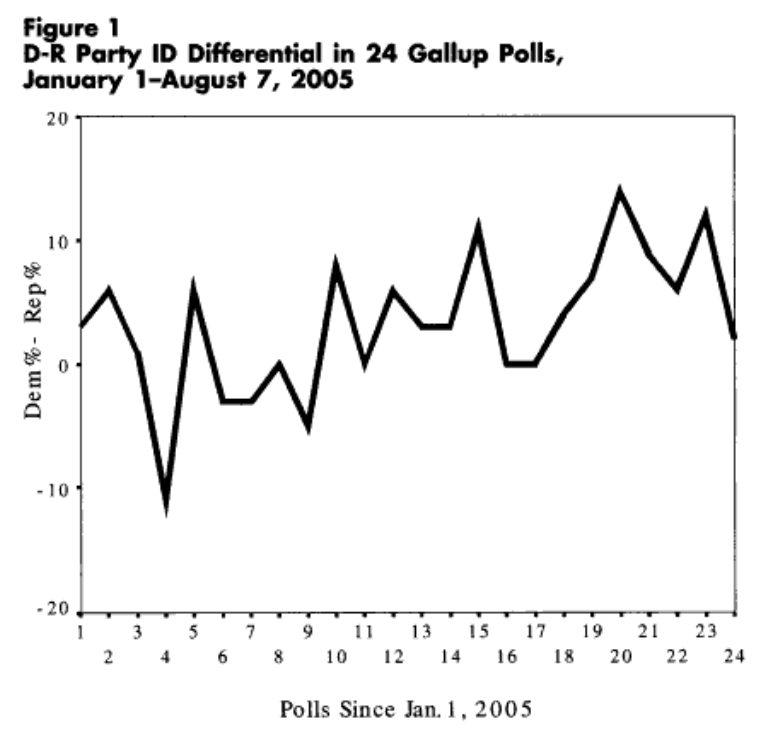 Secondly, beyond just general sampling variability, differential partisan nonresponse bias could be at play. As many have documented (and how I’ve discussed before), partisans’ willingness to partake in political surveys can vary over time. A collection of evidence points to a role for the news and political environment in shaping this willingness and how it varies by party. It’s worth briefly discussing each of these past bits of evidence.

For example, during the 2016 election, Republicans became less likely to participate in polls when things were going badly for their candidate in Trump (i.e. negative news and controversy, such as the period after the Access Hollywood video release). Gelman et al. (2016) show something very similar for the 2012 election in the time periods surrounding candidate debates (e.g. Democrats becoming less likely to take surveys following a supposedly poor first debate performance by Barack Obama), and describe opinion swings as “artifacts of partisan nonresponse.” Newer (preliminary) research from Mark Blumenthal using SurveyMonkey data appears to show evidence of differential partisan nonresponse in 2018 midterm polling (taken from his abstract):

“SurveyMonkey’s tracking surveys in the Fall of 2018 show a similar pattern. For roughly three weeks following the Kavanaugh/Blasey-Ford hearings in late September, respondents who approved of President Trump – the second question asked on every survey – were more likely to complete surveys than respondents who disapproved. These same surveys showed increases in Republican party identification, Trump approval and a narrowing of the Democratic lead on the generic U.S. House ballot, apparent trends that all regressed to near their prior means in mid-October when the differential response patterns faded.”

In all these cases, differential partisan nonresponse had large implications for horserace results, overstating swings in vote intention and changes in candidate fortunes. Evidence like this is nicely complemented by work in progress from Jin Woo Kim and Eunji Kim. They argue that people pay attention and express interest in politics more when their partisan side is doing well, and less so when their side is doing poorly. For example, using ANES survey data since 1952, Americans who share the partisanship of a well-performing president become more politically interested than out-partisans. As another case study, Kim and Kim use the 2008 Lehman Brothers bankruptcy filing–a source of negative news for Republicans, the party in power–as a natural experiment, and show Republicans paid less attention to politics after this event that created a negative news environment for Republicans (the party in power).

In sum, several pieces of evidence point to differential partisan nonresponse bias as a key shaper of prominent survey outcomes like vote choice. At the simplest level, the partisan composition of a poll’s sample matters a lot for politicized outcomes that are heavily correlated with partisanship. But most pollsters shy away from addressing these issues, as–perhaps most importantly–there’s not straightforward weight for “partisan composition.” Partisanship as a variable is very stable at an individual and aggregate level, but can still vacillate, and no clear benchmark for it exists. Consequently, most pollsters seem to frown upon this weighting option. Weighting to vote choice–for which there’s a known distribution, the margin in the most recent election–represents another option. But given that most pollsters don’t use longitudinal panels, they’d have to rely on recalled vote choice, which is often not viewed positively–people may forget their past vote or recall it in a biased manner (though I’d argue this is a flawed common belief, as the best available data suggests recall is very accurate).

Given these issues with possible corrections, most pollsters proceed without adjusting their samples along some partisan dimension. In data I’ve analyzed over the last few years, this decision has implications for polling results, and can readily observed without microdata. The tendency seems to have extended beyond vote intention polls–as much of the aforementioned research focused on–and to approval ratings (for Trump). Specifically, I’ve been using crosstab figures to see how a poll’s partisan composition (the relative distribution of Democrats and Republicans in a sample) relates with Trump’s approval level (e.g. approve% minus disapprove%), and whether this also varies by polling methodology. The distinction on methodological decisions I make is whether a pollster includes a weighting correction for partisanship, past vote choice, or something along those lines. During the first half of 2017, I came up with the following graph:

On the left, partisan composition and Trump approval had no relationship among polls that corrected for their sample’s partisan composition in some way–in other words, taking a step to address partisan nonresponse bias. The right panel, however, shows a fairly strong relationship between the two variables among pollsters that didn’t correct for partisan composition. In essence, their Trump approval numbers came in part to reflect the balance of Democrats and Republicans in their sample, and less so the assessment of Trump, as intended. The fewer Republicans that happened to take a survey (perhaps because of negative news surrounding Trump during his first term), the worse Trump’s numbers looked. Such opinion movement–typically interpreted as minds changing about Trump–would thus turn out to be illusory. (I took an alternative look at Trump approval numbers and also a look at Obama’s approval numbers in other posts with the same overarching topic in mind, and came to similar conclusions.)

Circling back the original subject of this post, it’s worth considering what all of this past literature and evidence means for polling after an event like the Mueller Report release. In generating an environment with plenty negative news for Trump, this situation seems primed for a partisan nonresponse dynamic. Namely, mass Republicans might start paying less attention attention to political news in light of negativity swirling around their co-partisan president. Given that taking a poll is itself a political act and a form of expressing oneself politically, this period could easily make Republicans disinclined to participate in polls (whereas Democrats, seeing a more congenial news environment that damages an out-party president, may be more likely to partake in them). In turn, as past examples have taught us, Trump’s approval might decline as a result during this period, but in fact be an artifact of sampling and partisan nonresponse.

The recent result from the Morning Consult poll prompted me to look into the data. The poll showed the worst mark for Trump in all of its weekly tracking history, and the -18 net approval was a sharp drop from a previous -7 net approval. Could changes in the partisan composition of the poll–indicative of partisan nonresponse patterns–be accounting for this drop? To get a sense of this, below I look at the pre- and post-Mueller report release polls and track Trump’s approval and 2018 House vote choice numbers in each. House vote distribution here aims to capture underlying partisanship distribution in the sample (similar trends result using partisanship instead of vote choice): 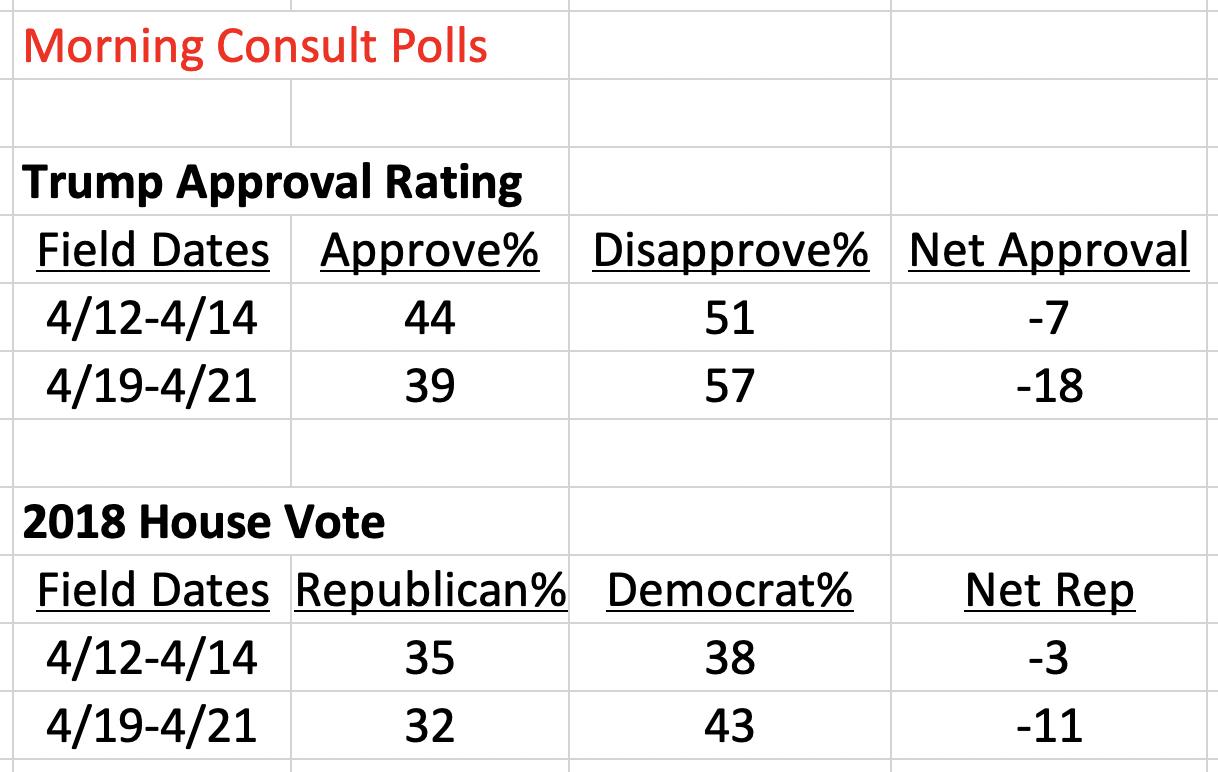 From the period before (4/12-4/14 poll) to after the Mueller Report release (4/19-4/21 poll), the partisan composition of Morning Consult’s polling sample becomes noticeably more Democratic. After being a net -3 points Republican before the report (three percentage points more Democrat than Republican), it becomes a net -11 points afterwards. At same time, as noted before, moving across these polls also reveals Trump’s net approval worsening by 11 points. Although a crude comparison and other factors could be at play, the relationship is pretty clear: as the partisan composition of the poll changes, so too does a politicized outcome like Trump approval. The sample becomes eight net points less Republican, and Trump’s approval declines by a net 11 points. It’s worth noting that unless people are suddenly much more likely to misremember their 2018 House vote (which available data suggests is generally unlikely) then the effect likely flows from partisan composition to Trump approval ratings. Differential partisan nonresponse bias–perhaps spurred by a negative Trump news cycle that dissuaded Republicans from participating in polls–seems to play a role here. Though that’s a specific mechanism that this data can’t precisely isolate, at the very least, fluctuations in Morning Consult samples’ partisanship are strongly influencing their Trump approval results–overstating real opinion change in the process.

Not surprisingly, Morning Consult does not include any explicit correction for the partisan composition of its samples, at least according to its public methodology statement:

Decisions like this, as suggested by my earlier analysis, make polling results most susceptible to partisan nonresponse bias. In other analysis, I ran the same comparison–partisan composition vs. Trump approval–split it up by individual pollsters, as by mid-2018, there was a large enough sample for some pollsters to perform this analysis. The plot immediately below shows this comparison across different pollsters:

Positive relationships emerge in most cases. One of the exceptions is notably YouGov, which weighted to 2016 vote choice in their polling. Morning Consult, on the other hand, shows the strongest relationship–its Trump approval numbers are most strongly affected by the partisan compositions that they happen to get for their samples. To put a numeric estimate on this, below I show OLS coefficients from regressing net Trump approval on net Republican% within each poll:

Results here confirm Morning Consult as the pollster most susceptible to partisan composition effects. A one point net Republican increase corresponds to a 0.86 point net Trump approval increase; the relationship is nearly 1-to-1.

As I’ve reiterated throughout this post, working with crosstab data and attempting to derive meaning without the best possible resources (e.g. like the microdata here) has significant limits. But the presented evidence is still consistent with a growing body of evidence of differential partisan nonresponse bias. Partisans’ willingness to partake in polls varies, often having to do with how congenial the political news environment is to their own politics at a given survey’s field time, and this has big implications for important polling outcomes like vote intent and presidential approval. When confronted with large swings in pre-election polls or approval numbers, observers should always first consider how the partisan balance of those polls’ samples looks and has changed since its previous sample. Otherwise, real opinion change could be confused with sampling artifacts. This also happens to fit nicely with many political science lessons on the stability of central political attitudes in the current age (i.e. partisanship, vote intent, and presidential evaluations); the “bar” for viewing opinion change in these variables as meaningful should be set high. A passage from Gelman et al. (2016) offers a good closing point:

“The temptation to over-interpret bumps in election polls can be difficult to resist, so our findings provide a cautionary tale… Correcting for these [nonresponse] biases gives us a picture of public opinion and voting that corresponds better with our understanding of the intense partisan polarization in modern American politics.”

See here for more data and analysis related to issues described in the above post.